on December 08, 2017
Before the 16 th Century, Goa was just a land of Temples. It was a Jewel in the East. Until the Portuguese rulers visited Goa as Spice merchants and later introduced their culture and religion, then Goa started to become the Rome of the East. Goa has a rich Vedic History. 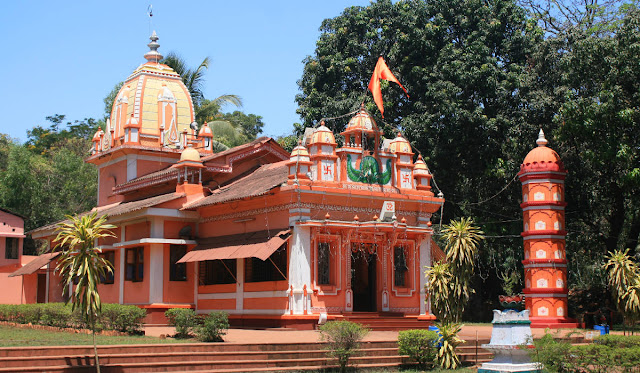 The Portuguese could not wipe out Hindu Temples from Goa

The Portuguese were not at all secular or democratic during the rules over their vast colonies spread out all over the world. As seen in Goa, there were dedicated to building only churches of Catholic religion and at the same time devoted equally in destroying and dismantling each and every Hindu temple and monument. The Portuguese could do this only for a few hundred years or so. Finally Democracy of India showed the way to the Autocracy way of Portugal to be wrong. Today India protects the same churches and chapels that the past Portuguese rulers have left and gone. Today after independence from Portugal since 1961, hundreds & hundreds of temples dedicated to myriads of Gods and Goddesses are visible all over the Goan Countryside. Along with the white washed Catholic Churches that peep through the greenery, side by side the colourful and brightly painted modern temples of Goa co-exist peacefully. The Portuguese have gone and the Hindu Gods & Deities reign supreme in temples of Goa once again

Temple Tourism in Goa has picked up vastly. Bollywood and other sources had wrongly fed inaccurate information that Goa is a land populated by Christians and Catholic Churches. During and after Portuguese rule too, Hindus in Goa have always been the majority in Goa and Catholics always a Minority. Indian Tourists visiting Goa for the first time find it a very pleasant surprise that there are hundreds of old and modern temples dedicated to their Indian Gods. There are Temple Tour packages in Goa, where during a day trip, tourists visiting Goa can see the most magnificent and popular temples of Goa.

The lamp tower is a very unique feature amongst the architecture of Goa Temples. Such huge lamp towers do not exist in temples in neighbouring Maharashtra and Karnataka. The exceptional Mahalasa temple of Goa has an awe-inspiring lamp tower placed in its courtyard. The lamp tower is six-storied; it is 400 feet high and has 21 rings of lampsaround it which holds 150m lamps. A captivating scene is unfolded when all the lamps are lit.

Temples of Goa dedicated to GanvPurush

The term “GanvPurush” literally translated means, Village Person, but to the local Hindu villagers of Goa it means more accurately to stand for “Village Protector”. Every village and ward it seems by local folk lore and belief, trust to be having some sacred spirit protecting the village and villagers. To such “GanvPurush” are dedicated many Hindu temples for invoking their blessings and protection. GanvPurush was Hinduism’s ancient answer to modern day corporate insurance. In other words, If God is with me, then who can be against me”. Bodgeshwar Temple at Mapusa in North Goa is one such fine example.

Some Famous Temples of Goa