on December 09, 2017
Goa has lots of remnants of the last Portuguese culture. One can still see lots of ancient and huge Portuguese styled houses existing in the towns and villages of Goa.

The old-fashioned pre-Portuguese homes were inward-looking with small windows; the households opened into courts, and seldom opened onto roads. The Catholic households constructed or renovated between the middle of the 18th and the 20th centuries were more outward-looking and decorative, with balcões (covered entranceways) and verandas facing the paths. The large balcões had built-in seating, open to the street, where men and women could sit together and ‘see and be seen’, chat with their fellow citizen, or just relish the evening breeze. These balcões were bounded by patterned columns that sometimes continued along the steps and added to the height of the house. 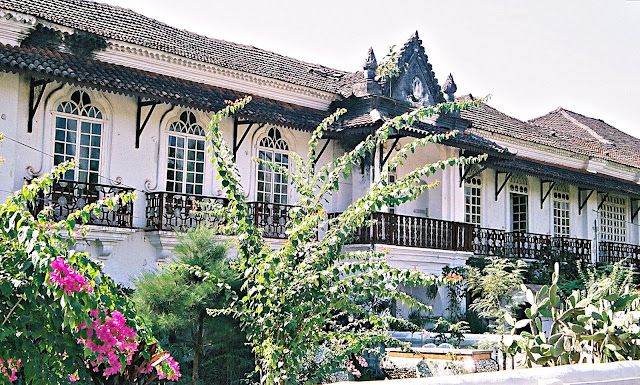 This, together with the platform, which usually designated the standing of the owners. The houses of rich landlords had high podiums with grand staircases leading to the front door or balcão. Large ornate windows with stucco decorations open onto verandas. These may seem purely decorative, but have their origins in similar decorations in the windows of Portuguese houses. These elements of style were procedures to help sailors identify their homes at a distance as they sailed in. The design is therefore an import but serves a similar purpose in Goa: to help construct the identity of the home. Windows gradually became more decorative, ornate, and communicative. Front doors were fringed by columns or pilasters. Railings were the most sophisticated aggrandizement in a Goan house. Pillars, piers, and colours do not seem to be swayed by any style in particular; rather they toe the line to a rather mixed bag of architectural styles.

Intense and astounding colours—initially attained with vegetable and natural dyes—played anessential role in Goan architecture. Colour was ornamental and used purely to create animpression. With a colour wash, the house looked "decent" and therefore demonstrated the financial well-being of the family that lived in it. Here art in architecture accomplished a social function. During Portuguese rule the owner of the house could be fined if his house was not painted.The walls were made of mud and then later of laterite stone; they were usually plastered then painted. Very few buildings are coloured exactly alike and solid colours are used for front facades; interiors are usually in paler colours/white with solid color highlights.This rendering or piping in white is the result of the unwritten rule during the Portuguese occupation of Goa that no private house or building could be painted in white. Only churches and chapels revelled in this honour.

Portuguese Houses are Antique and getting endangered

The magnificent Portuguese styled houses in Goa have already become antique. In India anything that is more than 100 years old and still surviving and intact is an antique. The more old, the more antiquated it is. Portuguese houses in Goa built in Portuguese style have stood the test of time. There are houses that are multiple hundreds of years old. One Portuguese house in Loutolim claims to have walls painted more than 200 years ago and the paint is still colourful. The Government of Goa and Private Philanthropists should step in to save Goa’s Wonderful Tryst with Portuguese Architecture houses.
Portuguese Houses of Goa