on December 21, 2017
Once on an official visit to Goa, the then Prime Minister of newly independent India, Pandit Jawaharlal Nehru remarked about a certain oddity that he noticed among the people of Goa. Pandit Jawaharlal Nehru on his visit to Goa commented in Indian language Hindi that 'YE GOA KE LOG AJEEB HAIM” plainly translated into English meaning “These people of Goa are Odd”. He said this in reference to the background that Hindu people in Goa were reading their daily dose of newspapers in Marathi Language and speaking their Mother Tongue Konkani at home. Similarly the Catholic people were reading the daily English newspapers and speaking Konkani at home. This confusing oddity made Pandit Jawaharlal Nehru make the above remark. 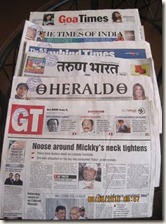 In the list of officially-accredited Newspapers in Goa are, The Navhind Times, The Herald Times and The Gomantak Times (all in the English language) and Gomantak, Tarun Bharat, Nav Prabha, Pudhari, Goa Times, Sanatan Prabhat, Goadoot (all in Marathi), besides Sunaparant in Devanagiri-script Konkani. All are dailies. Gomantak was on one occasion the principal daily of Goa, before being outdone by Tarun Bharat. In recent times Goa Doot has been emerging as the most popular daily newspaper.

English Newspapers available in Goa
The Times of India

English Herald Publications to publish new Marathi daily newspaper.
The scenario of Newspapers in Goa is a very confusing one. There are almost dozens of Marathi newspapers available, some locally published, some coming from neighbouring states. They are very popular with the majority Hindu population of Goa. The recent Entrant among the few English Newspapers was, The Times of India – Goa Edition. The latest news to hit the Goan newspaper scene is the Oldest English Goan Newspaper venturing into the vernacular field of publishing Goa’s latest and very own new Marathi News Paper yet to be launched titled, “DAINIK HERALD”.

The inputs, information, collection, compilation of this exhaustive list of books on Goa are done by none other than Mr. Frederick Noronha. The credit completely goes to Mr. Frederick Noronha. He is an enlightened journalist based in Saligao in the Bardez district of North Goa. He is full of life in cyberspace and actively engaged with internet information involving Goa and its developmental and environmental concerns. If you need to buy online, books on Goa, books of Goa or books in Goa then please visit http://www.otherindiabookstore.com/index.jsp