on December 21, 2017
There is a lot of confusion with regards to the term, “Discotheque” in Goa. What really constitutes a Discotheque? Are all Night Clubs of Goa, actually Discotheques? What is the difference between an authentic Discotheque and other party places in Goa? 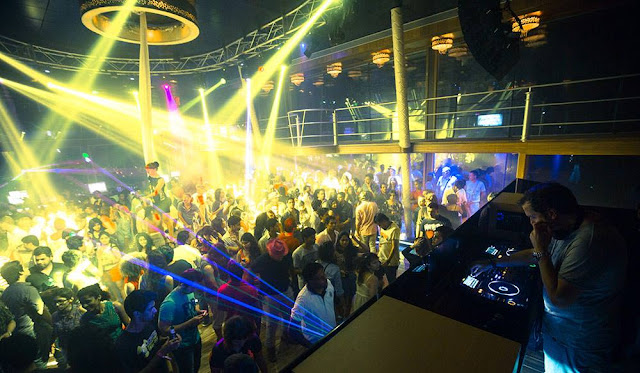 What is a Discotheque in Goa?

Originally discotheque is a place meant for dancing to live or recorded music, with the dancing place having sophisticated and extravagant sound and light systems to blow your mind.

Discotheque’s originally played only a type of music called Disco. This Disco music consisted of high Vocals offering a steady beat and a heavy bass line. Internationally after the 1970’s performers and bands such as Donna Summer,Amanda Lear, The Bee Gees, KC and the Sunshine Band, Chic, and The Jacksons made Disco music and dance ever more popular.

In Goa, one has to remember that the word, “Discotheque” has become synonymous with any kind of place for hi-fi live or recorded music, any top of the line Party place, any Night Club with a dance floor and clubbing facilities, any pub with loud music, any place where groups of people can enjoy good music, good dancing and good drinks n food.

The introduction of disco, which is fast beat dance music, gained popularity and fame in India and a number of discotheques began to establish themselves in different parts of the country.  The clubs and houses with their rhythmic sounds, the rocking music, the hip shaking dance movements and the wonderful blend of food and drink became the final destination for people who sought entertainment after a day or week of hard work.  The Nightlife culture began to fix its roots firmly and deeply into the traditional culture of India.  There is a diversity of nightlife in India and this culture grew fast.
Discotheques gained momentum among the public with their enthralling music and dance shows along with an elegant range of drink and food.

Some of the Top 10 disco in India are:

Capitol – The Orange Room – This is the most famous disco club in The Ashok Hotel at New Delhi and attracts the young, rich and the beautiful with its energetic bar and Discotheque.

F Bar and Lounge in Delhi – This disco is situated in Hotel Asoka in Delhi and the lounge’s ambience is the ideal place for people who love cocktail parties and disco.

Four Seasons Worli in Mumbai – The rooftop bar that offers excellent champagne and cocktail along with modern music on the 34th floor is a famous disco house.

Dublin Night Club – The most favourable disco floor, Valet, is located in Chennai at the Park Sheraton Hotel.  It offers excellent Disco dance and music conducted by professional DJs.

Cross Over – Situated in Whitefield the Cross Over Discotheque is the best place for youngsters to hang out in Bangalore.

Venom – This place offers a nighttime experience which is much more exciting than any other popular disco club in Kolkata with its lively entertainment of music, dance and drink.

Club Ibiza – The ‘Underworld’ is the glamorous discotheque floor housed in Club Ibiza in Kolkata that offers rejuvenating music and dance for nightlife lovers.

Café Mambo’s and Club Tito’s Restaurant – These twin restaurants in Goa offer the best nightlife experience in the country with its rocking music and dance in the beaches. (This Discotheque is in North Goa at Baga)

The Club at Maya – The Club is a well lit disco dance floor at the Maya Hotel in Pune that offers excellent nightlife to guests with their global music and dances by foreign hostess.