on December 08, 2017
Bhandap:   A traditional folk dance performed by the women folk of the scheduled tribe community who were the earliest settlers of Goa, in the second half of the Hindu month Bhadrapada. 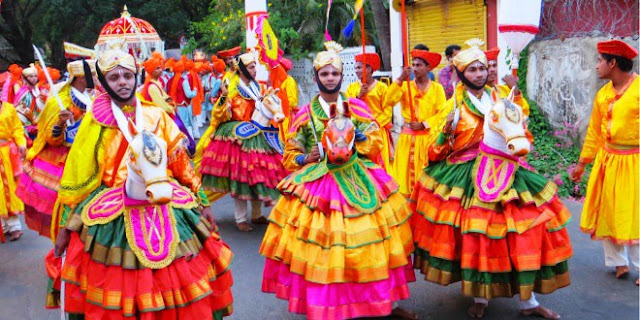 Ghode Modni:   It is in commemoration of the return of the Ranes after victories over the Portuguese in Bicholim and Satari Taluka.

Goff- folk dance with chords:  Manifesto joy and hapiness of Goan peasants after the harvest, during Shigmo Festival in Phalgum month.

Kala & Dashavtar:  Folk dance forms representing the subsequent development of jagar as tiatr. Some of the other popular folk dance forms are Ranmale, Ratkala and Tiatr.

Lamp Dance:  Performed during Shigmo Festival by women holding lamps on their heads.

Mando:   A love song. It represents the mingling of Indian and Western tradition.

Morulem:  A traditional folk dance presented by the backward community during Shigmo Festival.

Mussal-Khel-Pestel Dance:  A dance-cum-song in praise of valiant Kings. It also projects incidents in the village life of the times; Romat, Tonya Mel and Dhendlo are some other folk dance forms.

Raatib:   Part of religion ritual of Muslim community performed during 11th month of the Muslim calendar.

Suvari:  It is a traditional tone setter to all Hindu religious and festival performances.

Veerbhadra:  It is a typical Indian style dance performed in Ponda, Sanguem and Bicholim Talukas.

Zagor:   Folk Play. A cultural commotion presented in different villages of Goa in different styles by the Gauda community.
If you want a more detailed website about the Traditonal Folk dances of Goa and click here...
Cultural Dances of Goa