The of Origins Goan Cuisine

The Cuisine of Goa is a mixture of different food and eating habits of various cultures that have visited the shores of Goa and left behind their choices of tastes and palates. 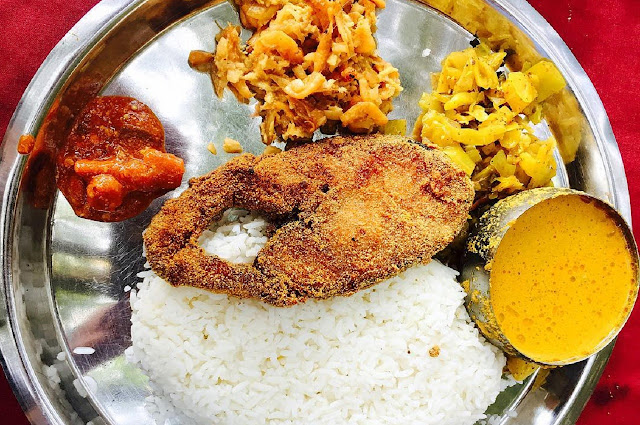 What is the Staple Diet of Goa and Goans?

The staple diet of authentic Goans is Fish Curry Rice. Also called as Sheet Codi in the local Konkani language. This is a Fish Thali that is eaten by all people of Goa. Sheet Codi or Fish Curry Rice is eaten by Goa Hindus, Goa Christians and even Goa Muslims. It’s like the national food of Goa.

The staple diet of Goa that is Fish Curry Rice is easily available in every restaurant of Goa. It consists of Organic cooked red rice, Coconut fish curry with a piece of cooked fish in it, a full piece of fried fish, tambdi bhaji or other local vegetable, pickle, green salad and Sol Curry.

Hindu Goans use a reduced amount of heat, tamarind and Kokum for souring and Jaggery for sugar. They use asafoetida, fenugreek, curry leaves, mustard and urad dal. Hindu cuisine of Goa is not very spicy; less onion and garlic is used. It also includes more vegetables, lentils, pumpkins, gourds, bamboo shoots, roots, etc. It is less oily and the medium of cooking is coconut oil.

Saraswat Daivadnya Brahmins of Goa are mostly fish eaters. They eat fish and chicken on most days, while eating strict vegetarian food (no meat, no-fish diet) on some religious or auspicious days. Fish and meat in their diet is considered as non-vegetarian. On the other hand other Brahmins belonging to the Pancha Dravida category are strictly vegetarian.

The rest of the Goan Hindus are non-vegetarian, but unlike the Catholic Goans, do not eat beef or pork, due to religious beliefs.

Coconut is the main ingredient of all cuisines of Goa

Coconut is the main flavouring ingredient of all Goan foods in Goa. Fresh coconut, in one form or the other, is added or grated, ground fine into a paste or in the form of a milk, extracted from the flesh of the fresh coconut. Since Goa is a tropical climate place, one can find coconut trees growing everywhere in Goa hence these ripe coconuts are available in every open market in Goa and often in grocery stores too.

The cuisine in Goa is a perfect blend of diverse food cultures - the Konkan, the Portuguese and the Bahamani Nawabi traditions. The major attractions of the Catholic cuisine in Goa are its Non Veg food and Seafood in particular. Seafood of Goa consists of fish, prawns, mussels, oysters, crabs, shell fish, lobsters etc. Goan restaurants also offer chorizos (pickled pig's liver cooked in vinegar with tamarind) &Vindaloo (spicy pork). Goans use coconut sauces.


TREAT FOR NON-VEGETARIANS IN GOA

Let us begin our gastronomic voyage from the traditional Goan snack, Pao CumChorizos (fried spicy Goan sausages, sautéed with onions, served in a bread roll) or Iscas de Galinha (fried chicken liver).  Portuguese potato broth with diced greens, called Caldoverde is popular too. In true Portuguese-Goan practice, many of the delicacies on the menu are several types of meat soaked in diverse spices for at least a day or two before being cooked with a plentiful dose of homemade spices.

Or you could try the GalhinaPiri-Piri, which are chicken pieces marinated in a mild mixture of piri-piri and Goan herbs, before being fried. As legend goes the Goa cuisine is responsible for introducing that quintessential Portuguese delicacy Chicken Cafreal (chicken marinated in a mildly spiced green coconut masala and fried) to the people world over. Another mouth-watering specialty of Goa is Pork Vindaloo (Pork cooked in spicy, oily masala gravy). The Goa cuisine promises that if you taste their Goan pork vindaloo once, then any other preparation of pork is not going to appeal to you.