The tropical land of Goa is blessed with a continuous coastline of around 105 kms starting with the shoreline of Maharashtra’s Virgin beaches and ending with the port town beach of Karwar. Goa’s first beach is Querim (Keri) beach as one approaches from Maharashtra and the last beach of Goa as one enters into the state of Karnataka is Polem beach. A very popular aspect of the beaches of Goa are its Beach Shacks. 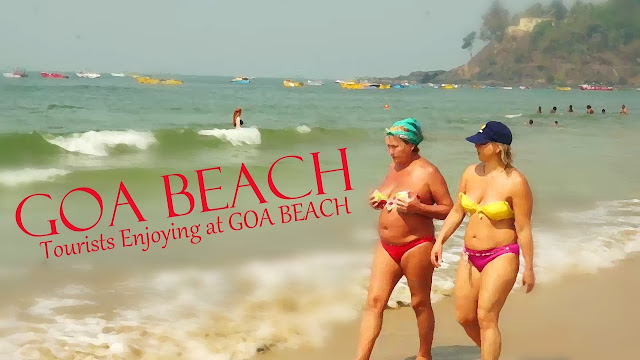 Goa is a north western state of India. The beach state of Goa is bordered by Maharashtra on its North and Karnataka on its extreme South. So Goa is sandwiched between the virgin beaches of the Konkan coast and the exotic beaches of Kanara.

Goa has 42 plus beaches. They are divided into North Goa beaches and South Goa beaches. Most populated and popular beaches are in the northern part of Goa. The quieter and longer beaches exist in South Goa.

Goa is the only place in the world that has Coco Cola Beach and Pepsi Cola Beach. How did this happen? There is nothing official about this. This is how tourist names to places happen in Goa and in Goa only! That’s Incredible India for you. Canacona is one of the 12 districts (talukas) of Goa. Canacona in extreme south Goa has a village (Panchayat) by the local Konkani name of KHOLA. The south village of Khola has two isolated beaches, one big and one small. Rich foreign tourists who visited this place could not pronounce the name accurately as Khola, so it became easier for them to say COLA BEACH. Slowly & surely the big beach creatively got called Big Cola beach or Coco Cola beach and the other became naturally Small Cola beach or Pepsi Cola beach.

Grandmothers Hole Beach in Goa is a secret worth sharing!! To get to this beach, one has to pass through a hole in the fort wall ruins and catch a breath-taking and wind-blown amazing view of the picturesque beach. The hole from where one can enter is small, so you need to squeeze through the gap in the Fortaleza Santa Catarina Fort walls to access the beach. The name, Grandmothers Hole Beach derives from a folklore that a grandmother used to sit at this hole waiting for her sons to come back from the sea. This tiny strip of sand is the prettiest beach in Goa, devoid and untouched by shacks.

"Surf Life Saving Goa" is the principal and primary water safety and rescue service in Goa. Their lifeguards are highly skilful and competent. Surf Lifesaving Goa (SLSG), run and managed by Drishti Special Response Services Pvt Ltd makes available , at present, Beach Lifeguarding Services under an Agreement with the Department of Tourism, Government of Goa at the beside mentioned beaches. At present SLSG employs 429 plus Certified Beach Lifeguards to provide the Beach Lifeguarding Services from 7.30 am to sunset at the coastal beaches of the State of Goa. Beginning from Keri (Querim) beach in North end of Goa to Galgibaga beach in South end of Goa, SLSG provides the beach lifeguarding services to avoid the loss of human life of the tourists and locals who visit. Apart from the human resources it also deploys state of art rescue equipment and rescue aid.
Beaches of Goa